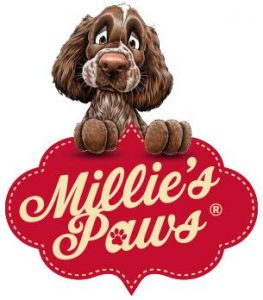 Is everything in a dog’s world black and white? That idea has been widely accepted for decades, but new understanding of canine anatomy and behaviour have shown that, while they can’t see the same colours humans do, dogs are not colour blind. Technicolor may be beyond their comprehension, but research shows that the dog’s eye can see much more than shades of grey.   The Myth About Colour Blindness in Dogs The notion that dogs see only in black and white has been attributed to Will Judy, a lifelong dog fancier, writer, and founder of National Dog Week. He claimed to be the first to declare that dogs had poor vision, able to see single shades and tones and only general outlines and shapes.  “It’s is likely that all the external world appears to them as varying highlights of black and grey,” Rudy wrote in his 1937 manual, Training the Dog.

In the last few decades, examinations of the canine eye structure have revealed some differences in basic design between humans and dogs. The differences were driven by function and evolutions. Dogs developed their senses as nocturnal hunters, tracking and catching critters at night. Their eyes are adapted to see well in the dark and to catch movement. For the purpose of hunting in the dark, canine eyes have a larger lens and corneal surface and a reflective membrane, known as a tapetum, that enhances night vision. The retina is where scientists have found the key to the difference in colour perception between dogs and people. The retina is composed of millions of light-sensing cells. These include: It’s the composition of the cones that make the difference in colour perception. Humans and a few other primate species are trichromatic, which means they have three kinds of cones. Dogs are dichromatic, having only two. Each type of cone registers a different light wavelength. The one for red and green gives humans their appreciation for a red rose or a Granny Smith apple. Dogs, and some colour-blind people, are missing red-green cones. Dog Vision, a web site devoted to canine colour perception, printed this side-by-side comparison of how the two species register the colour spectrum. [caption id="attachment_15455" align="aligncenter" width="420"]

So What Colours Can Dog See?

Scientists now believe that a dog’s colour vision is similar to that of a person who has red–green colour-blindness, according to research conducted by Jay Neitz, who runs the Neitz Colour Vision Lab, in the department of Ophthalmology, University of Washington. Dogs can make out yellow and blue, and combinations. This renders a lot of the world greyish-brown. That lush green lawn? It probably looks like a field of dead hay. That royal red velvet cushion? Still comfy, but it probably comes across as a dark brown blob to the dog. Dog Vision also offers an online tool to help you see things as your dog sees them. There are also apps that you can use to see what your dog is seeing at any time.

What Does This Mean to Your Dog?

Knowing that dogs don’t see certain colours, it would make sense to choose products that may be less aesthetically pleasing to you, but will be an eyeful for your dog. This knowledge may help explain why some dogs go crazy over yellow tennis balls, but are apathetic about the same ball in pink or red. Writing in Psychology Today, AKC Family Dog columnist Stanley Coren offered this observation: “One amusing or odd fact is that the most popular colours for dog toys today are red or safety orange (the bright orange red on traffic cones or safety vests). However red is difficult for dogs to see. It may appear as a very dark brownish grey or perhaps even a black. This means that that bright red dog toy that is so visible to you may often be difficult for your dog to see. That means that when your own pet version of Lassie runs right past the toy that you tossed she may not be stubborn or stupid. It may be your fault for choosing a toy with a colour that is hard to discriminate from the green grass of your lawn.”

Other facts about dog vision

Information courtesy of Kristin Kaldahl, dog agility instructor and competitor with 20 years in the sport. You may be thinking while knowing a dog's colour spectrum is an interesting piece of trivia, it really doesn't matter from a dog training perspective. After all, we aren't training dogs to drive, so it doesn't matter if they can see red stop signs or green lights. However, when you and your dog take part in the fast-paced canine sports, the dog's colour vision becomes a very important piece of knowledge that can help keep the dogs safe.

Why Does a Dog's Colour Eyesight Matter in Canine Sports?

Let’s think about the sport of agility, where a dog runs at top speed through an obstacle course. The dog must take the obstacles in a certain sequence, and each course is laid out differently. A handler has only a millisecond to communicate to the dog which obstacle is next. Poorly timed communication can not only result in the dog taking a "wrong course" obstacle, it can result in the dog miscalculating a jump or obstacle, "crashing," and possibly injuring him or herself. To ensure that the millisecond communication between handler and dog is clear, handlers work for years to train their dog to read the slightest physical cues such as hand signals, deceleration of forward motion, proper shoulder placement, footwork, and much, much more. These cues are perfectly placed and timed for the exact moment the dog will need that communication. Yet, if a handler is dressed in brown and is running on brown dirt in a horse arena with dull tan walls, all of the handler's hours and hours of preparation may be for naught if the dog cannot clearly and quickly visually distinguish the handler. This information from the handler is coming at the dog fast and furious. Except for occasional verbal information, almost all of the cues are non-verbal. The dog needs to respond to this information immediately. Fast dogs cannot take a second glance to see if they read that information properly. To help the dog, handlers must stand out visually from their background so that a fast-moving animal can see them.

Kristin usually competes in horse arenas on brown dirt with dirty white walls and fencing and noticed from videos of her runs that when she wore tan agility shirts her fast dog Asher wouldn't see some of my physical cues. He wasn't intentionally ignoring them. He appeared to simply not see them. Yet, when she wore shirts that contrasted with the background, he appeared to see all of her physical cues. She concluded if she was going to be showing in an arena with dirt surface and dirty white or grey walls, I will choose shirts that are in the blue spectrum. This can include bluish purple shirts. Also wear black and avoid reds, oranges, yellows and greens as they will become shades of yellow and brown. She also avoids solid whites as they can blend with the white walls. If competing on green turf with white walls or walls covered in advertisements, choose blue shirts unless the turf is a bluish green. Remember, green looks like yellow to a dog. A handler also needs to pay attention to the colour of their shorts or trousers. They may even want to think about wearing long trousers if they'll be running on dirt, as all colours of human skin could blend easily into the colours of a dirt agility surface. By wearing trousers, handlers can make themselves stand out better from the background. This clothing contrast concept would be important not only for agility, but for almost all dogs sports from obedience to field training. Anytime a handler gives the dog a visual cue, it will help if the dog can see that cue clearly the instant it is delivered.

When it comes to understanding colour contrast for the dog. Training equipment must also be taken into consideration. For agility, this also means that agility clubs and schools need to have a full understanding of what colours dogs see when choosing paint colours for their equipment. Many agility titling organizations have rules on colour options for contact zones, and most clubs go with yellow. If going with yellow, then the other colour on the contact equipment should be a shade of blue. This way, if a dogwalk sits on a dirt brown surface, the yellow contact zone may be harder for the dog to see, but the rest of the dogwalk's up-ramp will be easily seen. Conversely, if a dogwalk painted yellow and blue sits on a bluish rubber surface, the dog may not see the blue part of the dog walk as easily, but it can very easily determine the yellow contact zone, allowing it to safely find the up-ramp. However, using contact equipment painted yellow and red on a brown or green running surface will cause the equipment to easily blend into the background as everything will be shades of yellow and brown. Remember, dogs don't see red. Instead they will see shades of yellow and brown. Kristin believes contact equipment is best if painted the usual, albeit boring, yellow contact zones with contrasting blue bodies. Then, no matter the surface and background, some part of the equipment will pop out to the dog as it heads to the up-ramp. Coloured agility jumps must be considered, too. Red, yellow and green jumps will all be shades of yellow and brown. If they are located on a brown or green surface, the dog is seeing it all as shades of yellow and brown. The white bars do help, but solid white jumps with contrasting blue tape or bright blue jumps with white bars would probably be among the best colour choices.

The Problem with Yellow Tables in Dog Agility

Kristin also points out a trend in agility to paint pause tables yellow. This is causing many dogs to run by the tables when the tables are placed on dirt surfaces as the yellow will "blend" into the brown. Handlers are often befuddled as to why their usually consistent dog avoided the table when the simple fact is that the dog just didn't see it. Dog safety is the most important consideration for any dog agility handler Other dog sports need to take dogs' colour blindness into consideration as well. From Flyball to obedience competitions, teams can gain an edge by paying attention to contrasting colours from the dog's perspective.

Even when training a house dog, this knowledge is helpful. If asking a house dog to learn to fetch a stick on winter brown grass, it will be harder for the dog to see where the stick is thrown. Instead, use a toy in shades of blue on that winter brown. For the house dog, it might be wise to make the dog's "things" colour contrasting to the environment. From dog bowls to beds to toys, having them visually stand out to the dog will make them easier for the dog to identify and might make them more engaging to the dog. This information becomes a bit obvious once it is pointed out, but paying attention to contrasting colours in dog training can help your dog learn faster and stay safer as you both play together.
© 2019 Copyright Millie's Paws Ltd. Designed, developed & hosted By Ecosse Graphics Ltd
Menu